Animal Kingdom is Perfect for Preschoolers

When parents plan a vacation to Disney World, the first place they always take their preschoolers to is Magic Kingdom. There’s no doubt why; it’s a magical place full of characters, parades, and many unique rides suited perfectly for this age group. What often gets overlooked is just how much fun Disney’s Animal Kingdom park is for preschoolers. With only three rides for little tykes, parents overlook all the amazing shows and adventure and animals. Here are several reasons why Animal Kingdom is one of our favorite parks and one my daughter always enjoys. 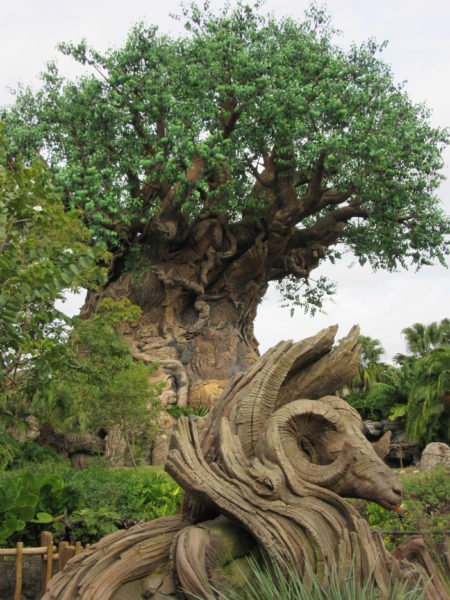 Disney’s Animal Kingdom park is all about exploration; something kids often do not get enough of in daily life. While many theme parks focus on rides, this one transports you to exotic environments. The jungles and towns of Africa, mountains of Nepal, India’s back country, and even 1950s American roadside kitsch. Young children absolutely love to explore their world and here something new awaits to satisfy their curiosity around each turn of the lush winding pathways.

What impresses me about this park is how Disney created such an imaginative park while keeping character references and themes subdued; the very antithesis of Magic Kingdom. The incredible level of detail in the landscaping and buildings truly makes guests feel as though they have been whisked away to another continent. This blank slate for kids’ imagination offers both freedom to explore and also many learning opportunities. 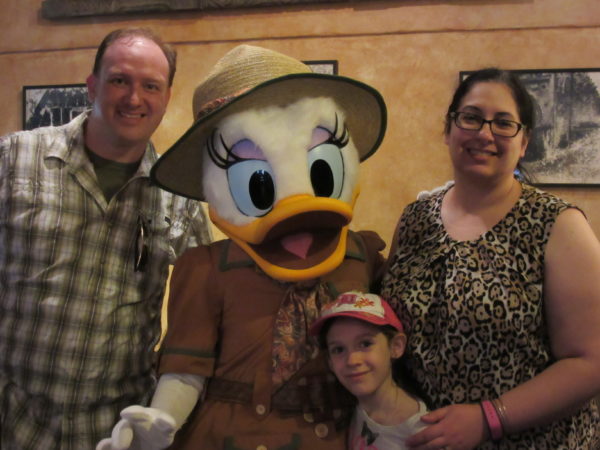 Activities for Preschoolers at Animal Kingdom

As we learned in the movie Up!, “The wilderness must be explored!” Animal Kingdom takes this to heart. Near the front of the park you’ll find a stand where kids, and kids at heart, can pick up a Wilderness Explorer field guide. The guide list 30 different locations around the park where guests can learn about everything from digging up dinosaur bones to animal habitats, or even foreign languages from cast members (Disney employees). After participating in each lesson a badge is awarded in the form of a sticker to place in their field guide. While some activities may be beyond the skills of preschoolers, there are plenty they will enjoy and its the perfect activity for families with kids of various ages.

Another activity, aimed straight at the preschool age group, is The Boneyard. This make believe archaeological site features a jeep for climbing, rope ladders and slides to clamber on, and plenty of sand to dig around in all day. There are dinosaur and mammoth bones buried in the sand for kids to unearth and cast members on hand to help them out and teach them about some of the work they are doing. There are some shady areas with fans to relax in, but many of the sand pits are out in the open, so keep an eye on sunscreen and hydration. The Bone Yard is located near DinoLand USA, which also works well if some family members want to wander over and hit some of the rides while the younger kids dig.

What would a Disney park be without characters? At Animal Kingdom you’ll find both popular and hard to find characters to meet. Mickey, Donald, Goofy, and others are all there, but dressed up for safari. You’ll also find Pocahontas, Russell and Dug from Up!, and we’ve often run into rare characters at the entrance on many mornings. A tip I often give to Mickey fans is to plan for lunch at Tusker House. You’ll not only enjoy a unique buffet, but Mickey, Donald and their crew come by each table with plenty of time to interact and take pictures. Tusker House is located in the Africa section, so schedule an early lunch and ride the Safari or take in a Lion King performance first. 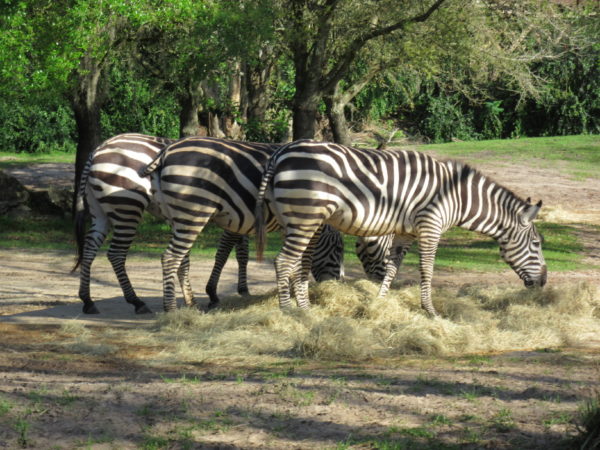 Animal Kingdom is not a Zoo

I’ve heard many novice guests referring to Animal Kingdom as a zoo and planning accordingly, or just plain missing out. Indeed there are enough animals to fill a large zoo, but the park is set up in such a way that they are mixed into the surroundings instead of being front and center. While wandering the park you will come across many animal habitats which are blended right into the landscape. Keep your attention on the path ahead and you’ll miss it.

There are also some areas of the park which are all about the animals. The most popular is the Kilimanjaro Safaris. Guests board trucks and literally drive right through the animal habitats, just as you would on a real safari. Kids of any age can easily get a view of the animals during the tour. Occasionally, giraffes and other animals will wander right up to the trucks. The ride can get a bit bumpy, but there is nothing that will scare younger kids. Tips: Reserve a FastPass+ for this ride as it is very popular. Mornings are the best time to see the animals moving about and evening rides are now available as the park hours have been extended.

There are two more ways to get up close to the animals in a more zoo-like setting. The first two are the Pagani Forest Exploration Trail and Maharajah Jungle Trek. Both are designed as wide, wandering pathways with several animal habitats to view. These are perfect places for preschoolers to roam and let their curiosity run free. Popular habitats you’ll find here include tigers, gorilla, and an enclosure where guests can mingle with beautiful tropical birds.

Rafiki’s Planet Watch is another appealing area for preschoolers. First, board a small train for a leisurely ride to the Conservation Station, then head out for some exciting activities. Kids can learn about conservation and animal habitats, watch veterinarians as they perform, routine checkups, or even surgery, on park animals, and get hands on with goats at the petting zoo. This is a great place to get away from the crowds and heat for a bit if kids get overstimulated or just need some down time. 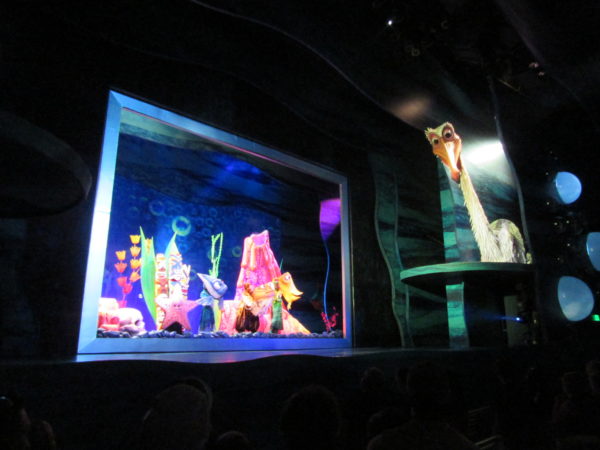 Animal Kingdom is not a place where younger kids will find a lot of rides. In fact, there are only three suited for this age group. The Kilimanjaro Safaris, Na’vi River Journey in Pandora, and TriceraTop Spin, which is a typical spinner ride like Dumbo in Magic Kingdom. What the park lacks in rides, they make up for in street entertainment and live shows.

As you wander you’ll come across street performers scattered throughout the park. These range from music and dancing to mysterious characters that blend into the environment. The dance parties are a lot of fun, but can get loud and crowded, so keep and eye on kids or skirt around if the noise bothers them.

There are two very different stage shows at Animal Kingdom. The most popular is the Festival of the Lion King. Guests sit in stands on four side of the performance area for this wonderful rendition of the movie. Performers, floats, and stage sections will enter and retreat from side hallways and the ceiling to recreate various scenes. If you arrive early, there is often opportunities for kids to get involved on the stage floor.

The second, and one of my recent favorites, is Finding Nemo the Musical. This rendition of the classic movie is performed by puppeteers wearing or operating large scale characters. It is an unique and amazing show to watch and perfectly geared towards younger kids.

A Bugs’ Life is a combination of theater show with animatronics and 3D visuals. Located under the Tree of Life, it’s easy to miss that the theater is even there. While it is a fun show, there are a few segments where the special effects may scare some younger kids. In one scene the lights turn off and it feels like bugs are flying around, so use your own judgment of how you think your children will react.

One show that is in transition now is Flights of Wonder. A long running stage show featuring all sorts of trained birds and interaction from audience members is getting an overhaul. The new show will still feature the famous birds, but will now be themed around Senior Wilderness Explorer Russell and his dog Dug from the movie Up! I think this will add a little more interest for preschoolers familiar with the characters, while still providing a high quality show. The new show is set to open sometime in Spring 2018.

Finally, we come to one of my favorite experiences at Disney World: Animal Kingdom at Night. The atmosphere somehow changes into something completely different. The low light from the many unique lamps, the quite jungle sounds, and even the scents of the thousands of plants are amplified. This used to be a rare sight with the park closing early, but now Disney has extended the hours and added some new experiences. The Tree of Life now has it’s own projection show featuring its animal carvings coming to life. The Rivers of Light takes place on the lake with boats, water jets, and animal floats lighting up the night.

I’ve saved Pandora for the end. This new land, which opened in 2017, is based on the James Cameron movie Avatar. While many fans criticized Disney’s collaborative idea, I think it blends perfectly with the theme of Animal Kingdom and takes it to new heights of imagination. The alien world of Pandora features a lush forest landscape with floating mountains. The highlight, though, is at night when this bio-luminescent world comes to life. Everything from the plants to sidewalks are aglow with light. It is a truly amazing experience and preschoolers will be amazed just walking around in this display of imagination. You’ll also find the Na’Vi River Journey here. This boat ride through the jungle is an amazing and relaxing ride, which will keep younger kids entertained. It is currently one of the most popular attractions at Disney World, so be sure to book a FastPass+ reservation as soon as possible or face a very long wait in line, which is rarely fun with little kids.

Often touted as a ‘half-day park’ by fans who only seek out rides, this theme park has so much more to offer. Disney’s Animal Kingdom is truly a great place for preschoolers. They will be able to indulge their curiosity and imagination to their fullest and maybe even learn some lessons along the way. As a parent, I’ve often enjoyed that my daughter can be fully immersed in an imaginary world, yet one that brings the real one closer to home. There are few places where you can experience so much of the world in one single place. 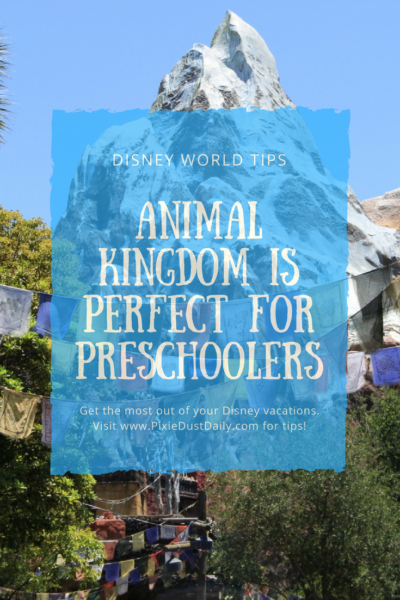 Animal Kingdom is Perfect for Preschoolers